I’ve written before about times when serendipity strikes and I feel in the groove, inspired and creative, mostly with photography. Since January 2014, when I started my 365 photo project, I have taken and posted a photo every single day. Until recently that is. Now, my passion is flagging and it feels like inspiration has deserted me. It is a strange place to be.

When this happens, Liz Gilbert urges us to follow our curiosities (in her book “Big Magic…”). If we can find something that captures our attention for a moment, we can look at it a bit closer. She says it may be a clue to follow, to find the next clue, much like a scavenger hunt. It may lead you to find (re-find) your passion or it may not. She mentions satisfaction when she says:

“You might spend your whole life following your curiosity and have absolutely nothing to show for it at the end – except one thing. You will have the satisfaction of knowing that you passed you entire existence in devotion to noble human virtue of inquisitiveness. And that should be enough for anyone to say they have lived a rich and splendid life.” (page 239).

This weeks’ photo challenge prompt is satisfaction, which for me means the pleasure I get when I complete a project, like a sense of achievement or when I am so in the moment doing something, that everything else fades into the background, so I guess I could also call it contentment or delight. The prompt made me think of times when I feel satisfaction and Liz’s idea of following our curiosities, so here’s an example.

Following my own curiosities

During my December break last year, I was wondering around the house, camera in hand, looking for inspiration. It had been days since I had taken any photographs. I came across my crystal ball. I’ve had some success using this as a prop for taking photos in the past. It sparked a small hint of curiosity – the first clue… what could I take using the ball? I laid it on a page I recently coloured in a colouring book. I took some shots. Although the colours were pretty, the shots were uninspired and soulless.

But the spark of curiosity was there and I didn’t give up. I began to think about other things around the house that reflect. I looked for more clues. I remembered that I have tried to photograph spoon reflections before, so I tried these next. What you see here are the ones I liked the most. Some of them reminded me of subtle Japanese art, while others were abstract enough to disguise the fact that they were spoon reflections.

When this mini photo session happened, I took these photos for the sake of creating, for the sake of being creative, with no thought of what I would do with them, if anything. I was satisfied and content with what I had done. 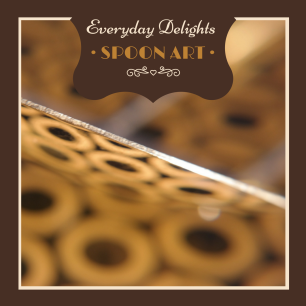 Now, almost 7 months later the story of their creation has given me something to reflect on and write about, and they illustrate this blog post. I guess on a small scale I was curious enough to see what photos I could get if I followed the clues. It was enough to inspire and motivate me for a day. My passion and inspiration are not back entirely,  it comes and goes, so I’m glad I took the opportunity to ‘catch’ this idea in the meantime, looking for delight in my everyday routines.

Linus Pauling brings the idea of satisfaction and curiosity together beautifully in this quote:

“Satisfaction of one’s curiosity is one of the greatest sources of happiness in life.”

2 thoughts on “Curiosity and satisfaction”