It’s Easter Sunday. Happy Easter to those who celebrate this occasion. I’ve decided to do the April A to Z Blogging Challenge and have come up with a theme of sorts.

A few years back I took a series of photos of my small Legographer friend, Dabelle based on the alphabet but I did not write any stories to go with the photos. Also, as I will be leaving South Africa soon to return to the UK to live, I also wanted to include some of my favourite South African words in the month, choosing one word a day to match the letter. The word is explained at the bottom of the post. So I’m going to combine the two and have a little fun this month. I do hope you will join me!

This post is meant to be about the letter A, so I will briefly introduce Dabelle and then get on with it. She was born nameless in the Lego factory but now lives in Africa with me and my teenage son and a whole bunch of other Lego characters. You’ll see what she looks like in the comic strip below. Like me, Dabelle loves travelling, and she is a photographer too. She will go just about anywhere and do just about anything for a photo. Her motto is “one hand for myself and one for the camera!”

Dabelle often does photo shoots for her fellow Lego friends (and other creatures). Being a Lego person herself, she has a good sense of how they live, so she knows how to get them to pose in a way that works for them.

Recently, she agreed to do a photo shoot with some aliens. Imagine that! Not really the kind of thing I would do, but she doesn’t seem to mind doing crazy, risky things. The shoot started out well, the aliens posed and smiled for the camera. Dabelle was beginning to get a feel for how to get some great shots from them. “Yes, that’s great. Smile!”

They started moving closer and closer to her. In her discomfort with models who don’t do what they are told, she shouted “Aikona, aliens” but they did not seem to hear her. Soon, they were upon her: “Don’t get any closer! Help!!!” 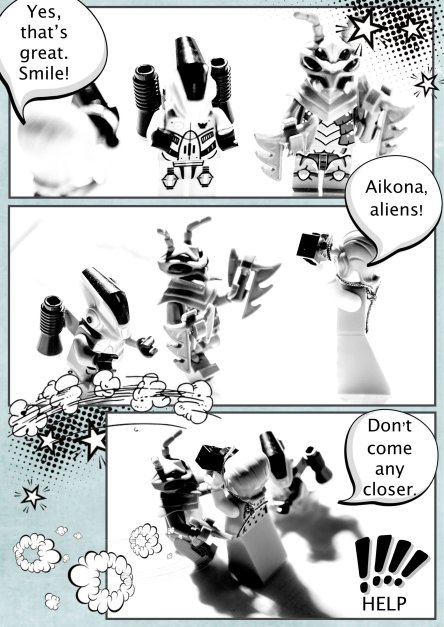 Too late, they overwhelmed her – she got mugged! You see, it turns out they were after her camera and not her. Whew, what a close shave for Dabelle. Maybe she has learnt her lesson. But do you know what, I doubt it?

The South African word of the day

Aikona: [eye-koh-na] or [hi-koh-na] – a strong refusal/disagreement, meaning “No!”. This word is derived from the Zulu and Xhosa languages and does not occur in formal South African English.

And the words in italics?

These are the words I posted for my first Wordplay fun challenge last Sunday and I have incorporated them into this story. The words were: see, know, hear, sense, feel, live, imagine.

So there you have it. My first instalment of the A to Z challenge. See you tomorrow for the next letter.

Proudly part of the

Creating Memories through Writing, Hobbies and Photos. And I play 5-string banjo.

An ordinary life lived in my own way.

Championing a better way of doing business for you and your community.

Anxious? Afraid? Let's do it anyway!

Helping Women find a meaningingful lifestyle in MIdlife & Beyond

musings of a frequent flying scientist

Visiting all of England's central public libraries ... and recording what catches my eye.

Creative Exploration in Words and Pictures

The World Is A Book...
Travels and Trifles

Adventures at home and abroad

MAKING A DIFFERENCE, ONE STEP AT A TIME

Exploring and Documenting Life-Affirming Alternatives to the Hero's Journey

Words about Art and Life